I’m in Finland, and yesterday we went husky racing. With husky racing, one person reclines in comfort on a reindeer skin on the sledge (my friend) and one stands at the back of the sledge, furiously manning the brakes and using their body weight to steer the contraption to victory (Me). 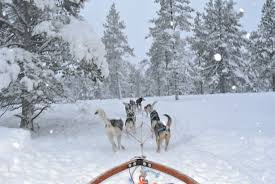 At the front there are the huskies, whose sole purpose seems to be to run as fast as possible away from the sledge. (Obviously they are firmly attached to the sledge, which makes their valiant efforts painfully futile, and reminded me that animals really are quite stupid).

Being the driver is quite excellent- you get to wear a ridiculously warm overall-type thing, and as the tallest thing on the horizon (apart from the trees, which you should try to avoid as much as possible) feel very much like the master of all you survey (which is pretty much exclusively snow, but still). There are, however, some downsides.

Hills, for instance, require you to jump off the back of the sledge and frantically run behind it, ‘helping’ the huskies to get the bloody thing up- the wretched animals show their gratitude by immediately increasing speed, leaving you flailing in the snow behind the sledge before screwing your courage to the sticking place and hurling yourself back onto the thing.

‘Why are you panting?’ My friend asked as I thudded back onto the sledge.

Unable to draw breath to reply, I noticed at this point that the huskies were dangerously close to being sucked into the engine of the snowmobile we were following. Forgetting for the instant their recent treachery, I attempted to jump on the brakes, only for the sledge to slip out from my firm and professional grasp, and found myself on the snow, directly in the path of the incoming husky sledge. Desperate to save myself from death by a thousand tiny husky paws, I rolled to the side of the path, plunging into a snowdrift so deep it took me several minutes to re-emerge from it.

Wearied yet triumphant, I made my way back to my sledge, which my friend had managed to stop by the curiously ineffective method of sitting in the same cozy position and shouting ‘Woah!’ with increasing panic. ‘I’m back!’ I announced, resuming my driver’s position. ‘Oh good!’ My friend replied. ‘Are the dogs OK?’ Speechless, I ejected my friend from her reindeer-clad throne, and enjoyed a very pleasant passage home through the endless white, the peace punctuated only by the immensely pleasing sound of my friend frantically trotting along behind us.