My little sister hates the witch-doctor

I’m back from Africa, mostly unharmed- a little burnt, a little fatter and a bird pooed on my ear whilst I was waiting for a ferry, but all in all, a smashing trip. Oh, and my little sister trapped my fingers between the car door and its window; but luckily it took her several moments to release them, figuring, as she said, ‘That I was making a fuss about nothing’.

So, some reduced mobility in my left hand, and a burning desire to inflict ill upon my little sister, but otherwise, everything is as it was before I left.

‘What are we doing today?’ I asked my Grandfather sleepily over breakfast- a breakfast which, although delicious, had to be eaten in a strange contortionist position, as I attempted to remove all parts of myself from being touched by the wretched dogs, who my Grandparents fed surreptitiously from everyone’s plates.

We were going on a township tour, so my little sister was told not to wear anything ‘flashy or expensive’. (No-one bothered to give me any sartorial advice, except my little sister, who suggested that I stopped wearing tops and ‘gave in’ to the muumuu).

I liked the township tour a lot; we learnt how to play the drums, were introduced to the head homebrew maker (a lady, which made my Grandmother squeal with delight, and shout, ‘Girl Power’, whilst my little sister and I tried to disappear with embarrassment), and I sat placidly with the local witch-doctor as my little sister fumed with rage over his ‘false medicine’. (To be fair to her, he told us happily that he bought his ‘remedies’ from the supermarket. it sort of took some of the mystique out of the whole affair).

As we were leaving, we took a final look around the poorest homes- shacks, without indoor toilets or constant electricity. 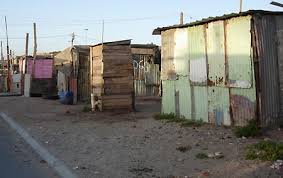 ‘My God,’ I said somberly to my little sister. ‘Yes, this has been so useful for you both,’ My Grandmother told us as we left. ‘Emma, now you can see your competition, medically speaking. And Lucy- you can write about this in your blog!’

My little sister and I stared at my Grandmother in confusion. Obviously, my Grandmother has never bothered to read my blog, and, given that my little sister then described it as a ‘endless diatribe about her troubles running baths of the correct temperature, or how she hates it when I put my alarm on snooze’, it is unlikely that she will now start. Which is completely fine, because I am well aware that there are lots of excellent things to read on the internet-except that I later caught her asking my little sister if she could have a copy of her dissertation, a 10,000 word project on the spread of visceral leishmaniasis through Bangladeshi sand-flies. There’s lots of great stuff out there to read that’s certainly better than this blog- but I’m pretty sure that isn’t it.

In conclusion, back from Africa physically OK, emotionally undone. But much improved on the drums.