There is some fact about people walking on the grass. It states that everyone does it if no-one’s watching, or no-one does it when people are, or there is no grass if there are no people, or signs are for people who don’t watch them or something. I don’t listen particularly carefully, but the point is: people watch other people.

I know this, because I do it too. In fact, everyone does it- my friends, strangers, the man who stood up this morning to give me his seat (I was wearing a very large coat, and also clutching the small of my back, because I didn’t stretch properly at the end of my spinning class yesterday, and also I was tired, and my legs hurt from spinning, and I had sat down before I realised the implications of accepting the seat), my mother, Obama.

I took my train seat because I was tired, and sitting down is always best (there’s a reason for the sudden burst of new spinning classes in London at the moment. The Americans know that secretly, we’re just like them. It’s only a matter of time before our portion and dress sizes catch up) and also because I get my very best work done on trains.

One of my friends brought this up yesterday. ‘How’s your week going?’ he asked me, as we eyed each other warily across the table. (We were waiting for our hosts to make yet another batch of pancakes. We were both certain that the next one ought to be ours. Plus, there was only one banana. We had cut it in half, but one never knows). ‘Busy,’ I told him. ‘Lots of trains. I was in Paris on Monday, and London today, and off to Leicester tomorrow.’ (I very much hoped that this exhaustingly glamorous schedule would encourage him to let me eat his pancake). ‘I like trains,’ my friend said. ‘They’re very good for working on.’ ‘I agree,’ I yelled happily across the table at him. ‘I work better on trains than anywhere else.’ 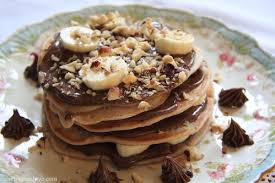 We spent the remaining pancake-waiting time discussing why trains were good for working on: the tables, the lack of distractions, the large windows.’But none of those things are unique to trains,’ my friend pointed out.’Why don’t we work just as well in libraries?’ ‘Pancake,’ our friend announced. ‘Who wants it?’ We both sat in mute politeness, until I reluctantly accepted the pancake. I had just leant over for the nutella when our host stopped me. ‘You’ve already had 4,’ she pointed out, unceremoniously re-allocating the pancake from my plate. ‘What?’ I asked in horror. ‘Yes,’ my friend continued unperturbed. ‘I’ve been keeping an eye on you.’ ‘Aha,’ I said to my pancake-thieving friend, who was now happily smearing nutella over his plate. ‘That’s why we work on trains. Other people are watching.’ I then proceeded to stare at him as he ate his pancake, hoping that a watched pancake never boils, or something.