How to be a grown-up

Although by almost everyone’s standards, I am a fully-fledged, actual grown-up, my Mother often feels the need to just quickly continue to bring me up. ‘Darling,’ she said when we met last month. ‘It is important always to be on time. And when you are invited out to lunch, don’t order the most expensive thing on the menu.’ Tidbits like this are more confusing than instructional, to be honest, because they assume a puzzling level of ineptitude on my behalf. ‘Right,’ I replied with the perfect level of teenage sarcasm I often employ around my Mother, ensuring that she realizes how grown-up and mature I have now become. ‘Good advice. I’ll be sure to stop turning up an hour late and ordering the chateaubriand.’ ‘Good,’ my Mother replied unperturbedly. ‘Now, if you finish your mains, there’s chocolate ice-cream.’

A few weeks later, I’m meeting my friend’s mum for lunch. ‘I’m terribly early,’ I text my friend, who lives in New York and doesn’t reply. ‘But obviously that’s much better than being late.’ Ignored by my friend, I comfort myself with the fact that arriving early is much politer than being late, except in cases of the sex.

‘Hello!’ I say cheerfully to the restaurant greeter. ‘I’m early.’ ‘Your guest is already here,’ she points out. ‘Oh,’ I reply, my chance to prove excessive politeness snatched away from me. Soldering on, I sat down to lunch.

I was meeting my friend’s mum firstly because I hadn’t seen her in a while, and secondly because she had invited me, and I love invites. All in all, I was set for a lovely lunch. ‘You’re early,’ I began accusingly, as she stood up to hug me. ‘Yes,’ she replied, somewhat confused. ‘Luckily I was early too, so I suppose it’s OK,’ I continued graciously.

‘Let’s order,’ my friend’s mum suggests. ‘Perfect,’ I think. ‘Here I can really shine.’ ‘I’ll have the salad,’ I say. ‘Oh no,’ she replies. ‘It’s very small. Get something more filling.’ ‘OK,’ I say, resolutely only looking at the very top part of the menu. ‘How about the soup? I love soup.’ (I do love soup. I’m not sure I love the soup on offer, which contains mascarpone, which often makes my tongue swell up, but I am following my Mother’s recent instructions to the letter). 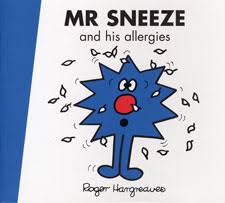 ‘Well,’ my friend’s mum says briskly. ‘You are certainly not being taken out to lunch by me and only having a soup. Get the steak.’ Sometimes being a grown-up is terribly difficult.