She doesn’t know it yet, but I’m taking my little sister to see ‘Ecstasy: The Movie’. This is because her favourite author is Irvine Welsh. I know this, because ‘If you liked school, you’ll love work’, one of his post-Trainspotting novels, was ostentatiously left out all over our house.

I personally did rather like school, and was well aware of the biting sarcasm the omnipresence of this book represented. (I am unsure if my little sister attended enough school to determine if she liked it or not).

Anyway, I am excited to take my sister to this Ecstasy movie and prove my cool credentials once and for all. (I would like to mention here that it was only after I read ‘Trainspotting’ that my little sister began to read Irvine Welsh. I found the book distressing and uncomfortable, but that is by-the-by. In a bid to overcome this, I gave a pre-GCSE book report on ‘Trainspotting’. 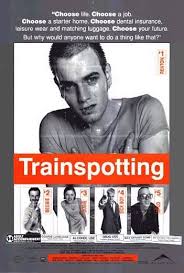 I was meant to read an extract from the book and then explain why I liked it. I cannot tell you how long I spent searching for a readable extract. This was the best I could do:

(Where you see ****, I paused in front of the whole class, and made frightened rabbit eyes. I then continued to read. I made no concession at all to any accents, and read the entire thing sounding like Mariella Frostrup. It was scarcely comprehensible).

‘Well,’ I continued afterwards. ‘You can see that these people are from a different social class because they are worried about 50p, which is not a lot of money’. (In my defence, I was 14 years old).

I like to think that ‘Ecstasy: The Movie’ will give me a second chance with Irvine Welsh. I have spent some time on the movie website. ‘This is a fantastic movie!’ Someone has written. I am delighted. Oh- it’s a quote from Irvine Welsh, Author. I personally believe that in the hierarchy of critics, the person who wrote the book the film is based on comes pretty far down. Possibly above ‘Heat’ magazine (who I have never ever forgiven for recommending ‘Iron Man 2’), but certainly below everybody else. ‘Perfectly captures the chaos and chemistry of the dance floor,’ Simon Morrison, MixMag. I think I’ll let that one speak for itself. Only I won’t, because I’m now going to point out that apparently ‘Ecstasy: The Movie’, is a replication of that awful, drunken  dance floor dancing and lunging that everyone tries to forget. Perhaps the sequel will be called ‘Ingredients: the kebab’.

I’m being desperately unfair, of course, because I haven’t seen the movie yet (it comes out on 20th April). And because even the mention of Irvine Welsh reminds me of how much cooler than me my little sister was. And how I had to ‘talk to the teacher’ after that book report.

2 responses to “Ecstasy: The movie”