Stop crying your heart out

I went to see the new Richard Curtis movie on the weekend, which allows me to tell my only Richard Curtis story, which is actually about Richard Curtis’s wife, Emma Freud. I was at a dinner, and the Curtis-Freud family came up. ‘Do you know them?’ One of the other guests asked me. The trouble with Richard Curtis is that the residents of Notting Hill feel as if they do, actually, know him. We know where he lives, because Notting Hill is a tiny village, and we are supremely grateful for that excellent estate agent movie he made, ‘Notting Hill’, which has seen house prices rise from expensive to Petra Ecclestone. However, factually, I do not know him at all. ‘No, I don’t know them,’ I replied sadly. ‘Emma’s lovely,’ My dinner companion continued. ‘We did our prenatal classes together.’ ‘How nice,’ I replied politely. ‘Is your husband looking after the baby tonight?’ Apparently, these classes happened in the early 1990s, and I had to spend the rest of the evening hiding from a woman who was very keen to ask why I thought she looked as though she’d just given birth. 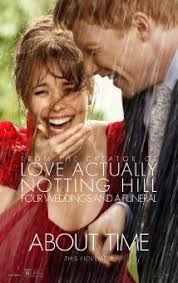 I was apprehensive about this new film, because the 2 people I know who had seen it both told me they had rarely cried so much at anything. I am not good about crying during movies. Last week I found myself crying during an advert about the effectiveness of a washing powder, which saved an overwhelmed working Mother enough time to dress herself and her family properly, but in my defence, Surf were introducing a new flavour.

I therefore approached ‘About Time’ with caution, and spent most of the film in a state of terrible anxiety, certain that appalling things were going to happen to all of the characters. ‘The baby’s going to die,’ I whispered to my friend. ‘Oh no, she is. It’s ‘One Day’ all over again.’ (The friends I saw ‘One Day’ with were slightly surprised I cried quite as much as I did during that film, considering I had read the book, so knew exactly what was going to happen).

‘About Time’ is a lovely film, although my friend complained that I made it a much more stressful experience than she had previously thought movie watching could be. ‘It’s unlikely that every single character in a movie dies,’ She pointed out to me as we left the cinema. ‘Unlikely,’ I replied sagely. ‘But not impossible. It’s much better to be prepared.’ My friend looked at me. ‘Yet, despite all of your preparation, I have rarely seen anyone cry so much at a movie.’ ‘Oh, this is nothing,’ I told her cheerfully. ‘You should see me when they start talking about invigorating washing powder fragrances.’