Are you a good toilet lock?

When I was a teenager, my Mother used to come into my bedroom very early in the morning, and whisper questions to me while I was still mostly asleep. Apparently, I answered much more truthfully than later in the day. Dubious parenting methods aside, it seems I haven’t changed much, because I have been dutifully following the advice given to me during an early-morning fitness class. (I started this class tremendously sleepy. I did not finish it in the same condition. Next time I’m doing yoga). “Make sure to drink lots of water,” I was told as I blearily entered the studio. “And replace any lost electrolytes throughout the day.”

Unfortunately, I have no idea what electrolytes are, so I have over-compensated by drinking 4 litres of water. Which I’m sure is great, except that I’ve spent most of this morning on the loo. Which has led me to the following conclusions:

1. A toilet should be, like an emergency exit, or the boiling water tap that people seem ferociously keen to install in their kitchen, where a tap suitable for drinking from used to be, immediately identifiable. I do not, when desperate to do a wee, want to agonise over whether I am a cowboy or an indian, or try to desperately decipher how a vaguely anatomically-based abstract relates to myself. Toilets should have either an M or a W, or a stick-figure of a person. (The ones with more complex drawings of women, knitting babygros whilst ironing their own petticoats, confuse me horribly, as I instantly assume they have been exclusively reserved for men who wish to multi-task whilst plotting how best to thwart upcoming sexual harassment suits, and wonder where I am expected to wee).

2. I do not expect toilets to be chaise-longue filled havens, primarily because I have no idea why anyone would choose to linger in a toilet, but recently I have had several space-related accidents. Toilets must, at a minimum, be large enough so that a person can enter them successfully, without placing either themselves or their possessions inside the toilet bowl itself. 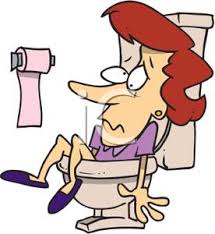 3. I am not prudish, and have spent most of the last 2 weeks wandering about our flat in my knickers, to the less-than-delighted notice of my flatmates (I have pointed out several times that I am considerately wearing knickers. This has mostly been met with irritated requests to “wear something else”), but I also believe that it is a very nice thing to be allowed to wee safely, without interruption or intrusion. Therefore I am a firm advocator of locks on toilet doors. Locks which are easy to use, easy to get out of, and make it clear to the person on the other side of the door that this toilet is already occupied. (This would also be a very good adage for relationships. I may quickly change my dating profile: ‘Are you a good toilet lock?’).