My Father called me last Saturday. I was barely alive, so I don’t remember much of the conversation. He called again on Sunday, when I was a little less hungover. ‘Well,’ he said, ‘That’s very good. We can have dinner there before. I do like Brecht.’ ‘Yes.’ I wondered what other, mysterious things I had agreed to do. I would just wait and see. It was rather exciting.

I merrily started my week, continuing to be my Mother’s PA (which I am doing either spectacularly or dreadfully it depends if she’s being sarcastic or not). The receptionist called me. ‘A gentleman keeps calling for you.’ ‘Yes.’ ‘Well, aren’t you excited?’ ‘It’s my Father, isn’t it.’

I picked up the phone. ‘Hi Dad.’ ‘So, just to confirm, let’s meet in the foyer at 6.30 tonight.’ I was in too deep. ‘Of course! Looking forward to it! I also like Brecht! Well, I’m not sure if ‘like’ is the correct word, but yes, smashing!’ I quickly started google searching Brecht plays in London. Nothing.

I called my Father. ‘Hi Dad.’ ‘Oh hello. What’s wrong?’ ‘Oh nothing,’ I said breezily. ‘Just wondering where the theatre is.’ ‘Oh, yes. The Young Vic. It’s actually closer to Southwark.’ ‘Marvellous!’ (It is possible my Father now thinks I have some kind of over-excitement disorder, but he probably thinks Brecht will calm me down).

I popped over to the Young Vic website. ‘What’s On?’ I asked politely. ‘Disco Pigs’. I see that I am less well-versed in Brecht than I thought. I read on. ‘Pig and Runt are soulmates. They share an appetite for drunkenness, recklessness and destruction. But on the eve of their 17th birthday it is an appetite for sex that threatens to tear them apart.’ 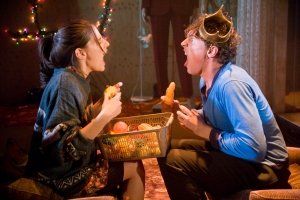 I am not sure I can watch a live performance of an episode of ‘Skins’ with my Father. I call him back. ‘Hi Dad. Obviously I’ve been looking forward to this for ages, but could you just remind me of the title of the play? It’s going to be great!’ My Father dutifully tells me we are to see ‘Street Scene’, and decides that we should meet in the foyer, rather than the restaurant. (I believe this is because he is worried about what I will order should I arrive before him).

I look back at the Young Vic website. ‘A glorious blend of Broadway musical and American opera, Street Scene won the first ever Tony Award for Weill, confirming him as one of the 20th century’s most original and popular composers.’ I’m pretty sure Brecht never won a Tony…but then I’m hardly in a position to question my Father’s attention to detail.